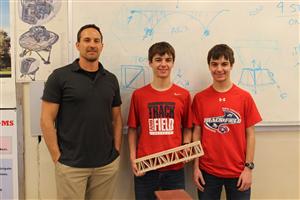 North Tonawanda Art and Architectural teacher Christopher Cook sent 44 students to the event. “This is the second year in a row we took first place and this year Matt and Tyler were the top bridge designers,” he said. “Their bridge weighed 38 grams and held 113 pounds! I also had students who took third, fourth and ninth in the top ten.”  Students worked after school to build truss-type or arch-type bridges using balsa wood and carpenter’s glue. The models were judged on their aesthetics, the appearance and quality of construction, and then weighed and loaded to failure by a testing machine.  Tyler said he and Matt were glad to beat last year’s placement. “Last year we took second place and it was nice to do better. I really enjoyed designing the bridge and building it.” Matt said they were excited when they won first place. “For a while we were in fourth place, so to be able to get to first was great.”  Both students will be attending the University at Buffalo School of Engineering and Applied Sciences this fall. “We always knew we wanted to go into engineering, but Mr. Cook’s class helped us to get there,” said Matt.  Mr. Cook says, “We have been in the competition for the last eight years and have come in first place four times. North Tonawanda always has the most students participating out of all the schools attending. The students love the challenge of the competition and are always improving their designs year after year. Last year Matt and Tyler took second place, this year they made modifications and got to first this year. I am very proud of all my students who participated." 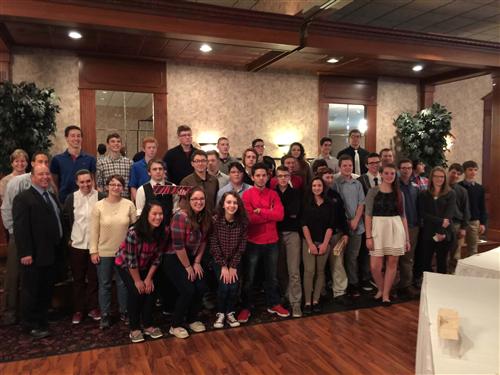