For the sixth consecutive year, the North Tonwanda Northstar High School Yearbook has won an annual award from Josten's. The publication earned the 2015 Regional Sample award, which is the second highest award the company presents during its annual award program to recognize outstanding work on high school yearbooks throughout the U.S.  Jostens will use the 2015 yearbook as a sample to show other schools its quality of journalism, thematic elements, thematic design, photography, cover design and overall design concept. On June 3rd, North Tonwanda accepted the award during an awards banquet at the Hotel Lafayette.  In attendance were yearbook

co-advisors, Heather Sicoli and Lindsay Hojnowski, and student editors-in-chief, Olivia Keller and Kelsey Shank.The 2015 yearbook is titled "Our Production" and used the marquee at the Riveria Theater, in downtown North Tonawanda, as their inspiration. This theater and movie theme is carried throughout the issue by the use of movie quotes, famous lines from actors, and side borders on each page to represent stage curtains.  It highlighted students

as the “stars” of the book.  It also included an Oscars’ page and a spread describing the history of the Riviera Theater.
“It was an exceptional honor to receive this award, since this was our first year co-advising the yearbook committee.” Said Heather Sicoli and Lindsay Hojnowski (co-advisors).  In response to receiving the award, “I can’t stop smiling.” Olivia Keller (co-editor-in-chief).
The creation of this 2015 yearbook was possible because of all the hard work and dedication the students put into it.  The Northstar yearbook staff consists of: Kelsey Shank, Olivia Keller, Alisha Schottmiller, Georgia Kijowski, Jenna Wilard, Crista 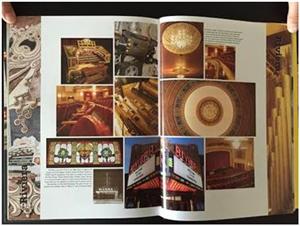 Sukennik, Melissa DiVirgilio, Theresa Bork, Madeline Gampp, Sarah Heverin, Emily St. Cyr, Max Cohn, and Hunter Winch.
The links on this Web site are provided for your information and convenience. By clicking on a link, you will be leaving the district website. Please be aware that, while we make every effort to evaluate all the sites to which we link, we cannot endorse nor be responsible for the content provided on these sites.
Copyright © 2002-2021 Blackboard, Inc. All rights reserved.