The students at Ohio Street Elementary were in for a real treat – they had a visit from BMX National Champion, Guinness World Record Holder and America’s Got Talent star, Matt Wilhelm.

Mr. Wilhelm gave a great talk about bullying prevention and showed the students some tricks on his bike.  School Counselor, Nathan Schelble, says his presentation was powerful.  “Matt mirrored all of the character traits we have focused on and taught so far this year.  He talked about kindness, respect, never giving up, encouraging others and doing one’s best.”

“When I was a kid I was picked on and I was fortunate enough that someone spoke up for me and included me in their circle and it turned my whole life around,” says Matt.  “I want the kids to know they can be everyday heroes by doing something simple and standing up for others.”  He says another lesson he likes to share is the first year he competed at the X Games.  “I came in last place.  It really taught me perseverance and that if you stick with something and keep trying you will be successful.” 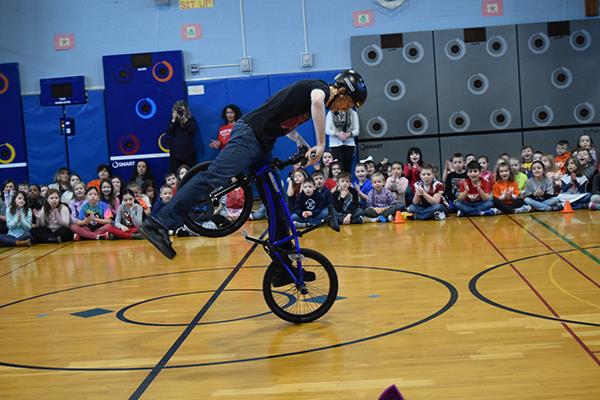