Drake Families Show Up To Mingle and Boogie

The Friends of Drake first family dance was a huge success!  One hundred and seventy-five families showed up to event on May 25th at the Sweeney Hose and spent several hours introducing themselves to staff and each other, enjoying pizza and wings and hitting the dance floor and photo booth."Our hopes were to draw in more families so that they could form friendships and become further involved in the school setting as well," says Drake Principal Katie Smith.  "The Friends of Drake specifically wanted to draw in our kindergarten families to get them to join Friends of Drake and get to know one another before the students even come to school."The event was a huge hit with much feedback about how much fun everyone had dancing, the photo booth, the balloon display and the food.  "Many of the families were able to form connections that they probably would not have made before," says Mrs. Smith.  "It was the best attended event we have ever had besides our theme baskets." 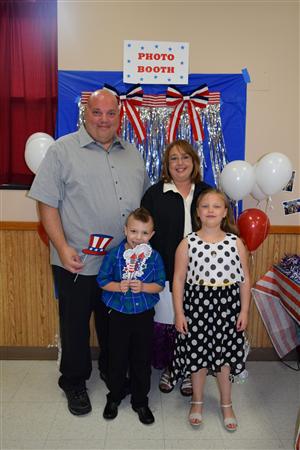 The Jamulla Family is pictured at the dance.
The links on this Web site are provided for your information and convenience. By clicking on a link, you will be leaving the district website. Please be aware that, while we make every effort to evaluate all the sites to which we link, we cannot endorse nor be responsible for the content provided on these sites.
Copyright © 2002-2020 Blackboard, Inc. All rights reserved.